New A380 operators come every once in a blue moon nowadays. ANA has three A380 frames on order and will be the next new operator of the aircraft. Their first plane entered the Airbus paint shop today.

Konnichiwa! The first #A380 for @ana.japan has entered our paint shop in Hamburg. It’s going to be a true work of art as we follow the detailed design for a very special livery! ✈️🖌 #airbus #iflya380 #a380lovers #plane #instaplane #aviation #instaaviation #travel #instatravel #avgeek #aviationgeek #aviationphotography #japan

The aircraft is set to fly from Japan to Hawaii 3x a week starting on May 24, 2019 with service on Tuesdays, Fridays and Saturdays. The service will increase 10x weekly as of July 1, 2019 when the second A380 enters service.

The aircraft will feature four cabins with five different seating options spread out in the following configuration:

The 5th seating style comes in the form of what ANA is calling Couchii, a concept similar to what Air New Zealand calls the Sky Couch and what Joon calls Cosy Joon.  These seats feature an extendable leg rests that convert the seats into a “bed”. Couchii passengers will also receive a dedicated bed sheet, pillow and blanket set amenities.

The first class suites look like a modernized version of the existing ANA suite found aboard all 777 products aircraft which are essentially composed of a lay-z-boy in a cubicle and will feature a massive 32″ personal TV. The suites will also include sliding doors.

All premium economy seats will feature a 38″ pitch and most seats will have a 15.6″ entertainment screen. The tray tables will also swivel 90 degrees so customers can still maneuver even when the tray table is open. 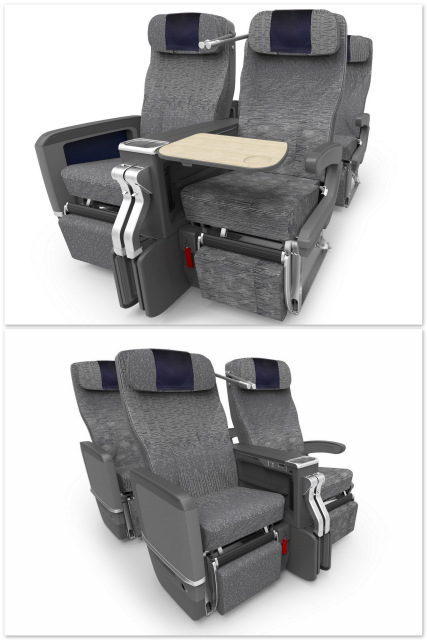 All seats will feature 34″ pitch and 13.3″ entertainment monitors. Each seat comes with power and USB outlets as well. Couchii seats will only have 32″ of pitch. On top of the new plane, ANA has plans for a special A380 lounge at Honolulu airport featuring separate entrances for premium passengers that connect directly to the upper deck of the aircraft, which will bypass the terminal completely. Other special features include a unique turtle livery for all 3 aircraft, referred to as Honu, and customized food and beverage in each cabin.

ANA has noted that First Class passengers will be dining on food from Michelin Start Restaurant,  Noe at the Four Seasons Resort Oahu.  Economy Class passengers will not be left behind on the gastronomic delights as they have a menu designed by Australian Celebrity Chef Bill Granger, famous for his amazing ricotta pancakes. All passengers will also have an “exclusive blue Hawaii cocktail” too.

Amenity Kits are on the specialty item list as well with business class kits designed by Fred Segal and First class amenity kits from Globe Trotter, which is an English luggage manufacturer.

Are you planning on flying the new ANA A380 Hawaii service?